In which Fiddle is un-stapled, re-collated, and healing up well!

Fiddle got released into a small portion of the pasture on Sunday, 10 days after Spay Day.

The first thing she did was check the perimeter fence to see how much grass she had been allotted.

The second thing she did was pose for a photograph.

Finally, she did what she's been longing to do:


I was able to pull out some of the staples myself.  However, it turns out that Fiddle doesn't much like being pinched by the needlenose I was using.
It also turns out that I am abysmally clumsy with the needlenose, and was getting worse with them, rather than better.   Sub-optimal.


My choices:
*  haul Fiddle to the vet clinic (40 minutes each direction) to have the staples removed.  That's a lot of diesel for 2 ounces of metal.


*  continue to fight with an increasingly-anxious Dragon about the pinchy-ness of needlenose.  That's a lot of dragon-osity that I prefer not to fight.


*  wait a few more days until Patty (who is a DVM in her day job) could come for a visit and pull those suckers out.  Patience is not my most outstanding strength, but this seemed like the best option.

Our first idea was to push Fee up against the stall wall; Patty could reach through and grab the staples from the safety of the aisle.
Except that Fiddle, who was actually trying to be good, indicated her discomfort with the procedure by stepping away from the way (and into me).


Since in the olden days she would have kicked the wall, Patty, and me (all with the same foot at the same time), I consider avoiding to be an improvement...but not helpful when it comes to pulling stuff out.


So, we moved to the cross-ties.  We also added:
an ice bag.   Numb up that incision area, and she won't feel a thing!


Except of course, that the ice bag is really scary.


Oh, you have carrots?  I can eat carrots while you have the cold crinkly thing.

Here's a carrot, you big sissy. 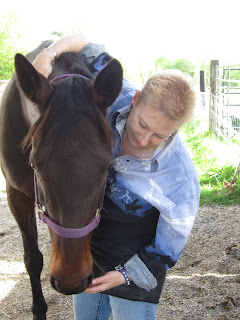 And then:  out to the big pasture, at last!