In which Fiddle has a hitch in her getalong, and we seek out help

So when I see something odd with her gait, I don't dawdle around.

When the vet noticed something a little glitchy at the midpoint vetcheck of Day 2 at Klickitat, I opted to ride her at a walk for the remaining 11 miles.  I could have pulled her at that point, but what we were seeing then was so intermittent that it was easy to doubt that there was anything there at all.  I was pretty sure she could finish without undue discomfort, and the vet agreed, so we went forward.

She probably could have trotted the remainder of the ride and still completed it without much trouble.  But why mess around with it?  We had plenty of time, so we walked--and she scored an "A" on her gait at the finish line.

A week later, I felt something a little hinky (thank you, Literary Horse, for that word!) at the start of a proposed 20-mile training ride last week and chose to flip around and return to the trailer immediately.  No need to stack miles on top of something that isn't quite right.

Four days later, it was farrier day.  We took some before/after videos.


Kelsie is a young farrier, and she is very good about observing and adapting.


She has already learned that although Fee's feet look like they are straight out of the textbook, my mare clearly has not read the textbook!

We noted that the funkiest foot (her right hind) is showing the effects of this weird movement:  the shoe has twisted on her foot.  It's not a huge twist, because we caught it pretty fast.


Her hoof angles and overall growth of hoof tissue lengthwise was pretty even.  And replacing all the shoes so that the are flat and straight on the foot will support correct movement again.

If this were the off-season, I would stop pursuing treatment at this point.  But this is not the off-season, and as Viggo Mortensen's character says in Hidalgo, it's still a long way to Damascus.

Or in our case, Naches.

With the departure for Renegade looming, I made a ton of phone calls, and finally found an equine chiropractor who isn't at the Region IV horse show in Idaho this week.

Only, Dr. Fehr isn't just a chiro.  She gave Fee a thorough stem-to-stern evaluation, starting with a trot-out and trot in circles.

Next, she examined the acupressure avenues.

Then, the more traditional muscle/skeletal exam. 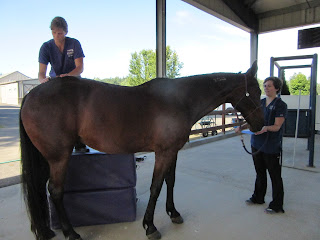 
Not just the obvious spot.  There were small adjustments to make all over the body.

In one location, there were four adjacent spots that were "out," so she could only adjust two of them (otherwise the whole thing would go wonky).

Well, she will PROBABLY feel a lot better in the morning, after everything settles down.  She will probably be "un-hinky," even.

It's possible, however, that her weird movement was compensation for a deeper injury.  By removing the compensation, she may seem worse because the real pain will be uncovered.

Given how happy she was to be adjusted ("really unusual" according to both the vet and the assistant), I'm guessing that the adjustment will make her more comfortable.  We did talk about adding some more support, aka Adequan or Legend.   My horse is 13 years old and she covers a lot of miles in a year, so more support is definitely on the table.

Short-term:  we are cleared for trail work at Renegade.  If she seems uncomfortable with any of the work, we will back off.  If she's sound and happy, we will progress forward and participate in the ride.

And we leave in the morning!