When I look at the pictures from the Mt Adams ride last weekend,
it seems like the ride was pretty strenuous.

I admit:  this is not an "easy" ride.  But that's not the whole story.

I'm broke (because of the sudden death of the stupid truck) so ride-sharing was needful.  THAT was an excellent reason to team up with Kitty and Mak!

Mak is lovely.  He reminds me of all the things I loved about the Toad, without the fear of being boingitied into the ground at random intervals.  We ended up telling a lot of Toad Stories on this trip!  :-)

The weather forecast for the weekend was "warm and sunny."

As always, the horse camp at Mount Adams is a beautiful place to camp.


The trails were beautiful.  Crews had a huge job to clear the winter blowdowns this year--apparently they sawed through 163 trees in a single day! 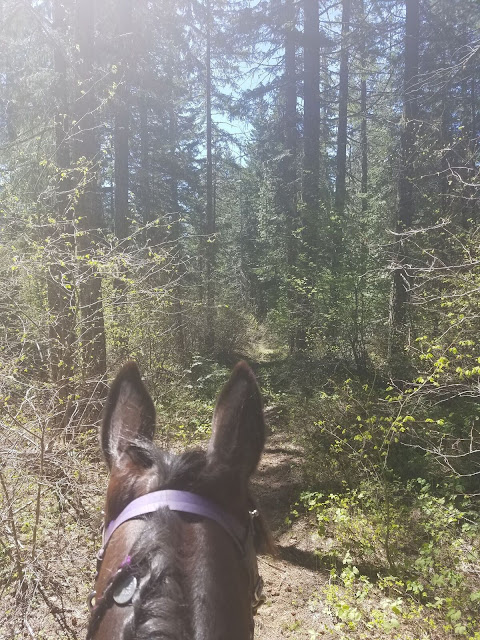 For a while, it seemed like stuff was going to fall apart.


Fiddle's shoe was stuck to her foot with one nail.  Gahhhhh!

Fortunately, somebody had LeAnn's phone number, and fortunately, LeAnn was headed towards us in her farrier truck (to mark trails for the Klickitat Trek ride two weeks hence...but the camps are only 20 miles apart).


We rode three loops with Andi and Kathy, and it was just like old times at April Daze 2015.


Back at the vet check!

Back out on the trail.  We had four loops for the 55-miler: Snow-King, Gotchen, Morrison, Ghost.

Fiddle led the group most of the day.


Just because it's sunny in this photo doesn't mean we were rain-free all weekend.  We got hit with rain showers twice on the Morrison loop, and there was a really big squall that hit camp once we were all back and finished.  I'm glad I put that tarp on the hay!

I needed to slow down for the final loop, because Fee's bum was getting tired and I didn't want a pull!  So we did the Ghost loop solo, walking the hills, and trotting the flats at "lip-flopping speed." 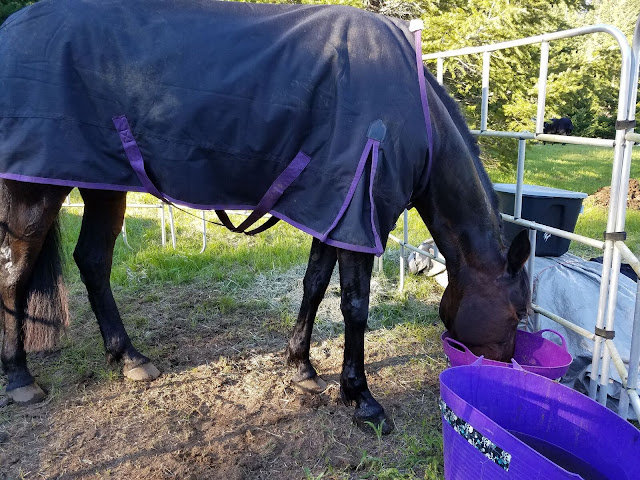 This was our first competition since 2015.  In the meantime, I had my second hip surgery and Fiddle spent a year recovering from a mysterious stifle injury.