I write a lot of stories that begin with an idea that gets reviewed and revised.

However, the best stories I write are the ones that appear in my head fully-formed, and insist that I write them down.  This is one of those.

A while back, Mike Williams got called up to Heaven.

All the way up the stairs (which are a lot easier to climb than he remembered stairs being on Earth), he worried that he wasn’t going to fit in with those angels up there.  They were probably always wearing clean white robes, he thought, and flapped around on clean wings playing harps and stuff.  Mike Williams had never really seen the point of harps, especially when you could go fishing instead.

Well, he finally got up to the gates, and there was ol’ Saint Peter, there at the gate, with that big book in front of him.  And, you know Mike, he walked right up to ol’ Saint Peter and stuck out his hand and introduced himself.  He was a little nervous, truth be told.  He hadn’t met a lot of saints before.  What if this one noticed that his fingernails didn’t always come clean?

But ol’ Saint Peter, he was just that glad to meet Mike Williams.  “I’ve been reading up on you, sir, and it seems to me that you’re just the fellow we’ve been waiting for up here in Heaven,” said ol’ Saint Peter.

“What are you talking about, ol’ Saint Peter?” asked Mike Williams.

“Well, it’s these gates,” said ol’ Saint Peter.  “The littlest angels like to swing on ‘em in the evenings, and the dogs all chase their tennis balls under 'em in the mornings, and I swear those horse-girls jump those flying horses over the top of ‘em when I’m out on my lunch break every afternoon.  The right-hand side won’t close all the way, and the left-hand side makes this terrible sound, like this…”  and ol’ Saint Peter wiggled that left hand side gate and it make an awful racket.

“Well, that’s not so hard to fix,” said Mike Williams.  “You just gotta get out your tools and…”

“Well, Mike Williams, that’s just the thing," said ol' Saint Peter. "I’ve got a lot of work to do, and not a spare second to spend on fixing these gates.  I just wondered if you might have a look at ‘em for me.”

So, Mike Williams squatted down to look at those gate hinges (and squatting down in Heaven is a lot easier than it had been on Earth, too) and sure enough, those hinges needed taking off and straightening out and just a touch of graphite maybe.

When he looked around, ol’ Saint Peter was talking to somebody else there on the far side of the gates…but underneath ol’ Saint Peter’s desk was a nice shiny red toolbox.

Now, Mike Williams didn’t want to bother ol’ Saint Peter, so he just grabbed out that shiny red toolbox and opened it up.  Inside there, he found exactly the tools he needed, and a little squeeze bottle of graphite too.

Those hinges didn’t take him long at all, and by the time ol’ Saint Peter went to swing the gate open for the next soul to come in, why, that gate was good as new.  And if there was a little “MW” scratched into the enamel down there at the bottom of the gate, well, ol’ Saint Peter never said a word about it.

Fact is, ol’ Saint Peter was so thrilled about that gate that he went around Heaven telling all the other saints and angels about Mike Williams.

And after that, not a day went by that Mike Williams didn’t have some little angel asking him to fix up a bicycle, or some horse-girl asking him to knock out the dent she’d laid into the horse trailer, or some saint stopping by to ask him if he didn’t want to lend a hand patching up that fishing boat so they could all go fishing together. And they make him feel real comfortable, there in Heaven, and nobody ever seems to notice a bit about his fingernails.

And every morning, after he drinks his coffee (but before the littlest angels and their bikes show up), Mike Williams peeks down through the clouds to see how Gail and the rest of us down on Earth are doing.

Then he throws the tennis ball for as many dogs as want to chase it (throwing that ball in Heaven is a lot easier than it was on Earth) until it’s time to pick up that shiny red toolbox and walk around Heaven to see what needs fixing. ` 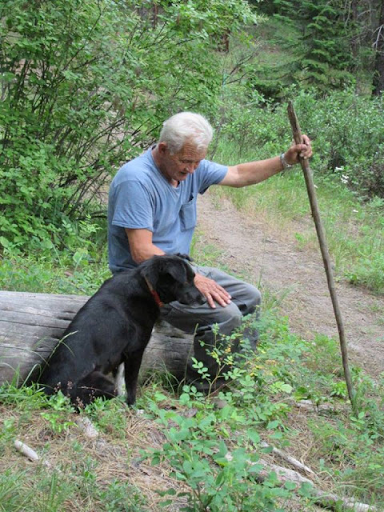