I've ridden at Home on the Range almost every year since 2000.  (There were a couple of years I did the trail ride with young horses, including Fiddle).

The ridecamp has changed location three times since I started riding it, but the terrain is basically the same:  endless, beautiful stretches of scabland and grass.  I didn't expect this year to be much different.  And in fact, the terrain was similar to past years...

this year, the condition of the terrain was substantially different.

This was our first clue that the rangeland had gotten a whole lot more rain than usual:


(the loser who speeds by at the end of the video got stuck in the mud about 50 feet after I shut off the camera...and he dug a gigantic trench through the middle of camp with his truck in the process.  I deliberately did not look to see who was driving)


Despite a dismal weather forecast, the morning of the ride dawned rather prettily.

I should know:  Fiddle and I climbed up a hill so we could warm up at a calm distance from camp and watch the sun rise.


The route is pretty.  There are a few farmhouses to trot by, and some irrigation creeks, 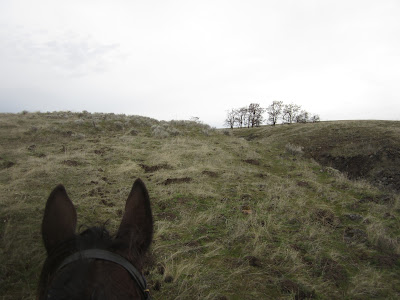 and even a railroad bridge to duck under.


Mostly, though, the first loop was cattle pasture and prairie.  14.5 miles in 2 hours...not exactly speed demons!

The second loop, however was tall grass and CRP Grassland.
The grassland retained the water that was absorbed and drained from the cattle range.  It wasn't deep mud...it was deep water.
That's the part where I mis-calculated.

I've ridden this ride so many times that I followed my routine...but although the temperatures were cool, my horse was working much harder than usual because of the wet ground.

The best guess is that I vastly under-electrolyted Fiddle, choosing to feed the weather, rather than feeding the work.  That's a big oops, and I should know better.
﻿
﻿

"Tying up" is the much-easier-to-say layman's term for Rhabdomyolysi, a muscular disorder condition occuring in horses either during or immediately after exercising.  Classic signs of tye-up include stiffness, sweating, muscle tremors and reluctance to move as a result of painful muscle damage.

Fee didn't ever show any of those symptoms.

Throughout the weekend, she was what we Pacific Northwestern riders call "EDPPMF":  Eating, Drinking, Peeing, Pooping, and Moving Freely.  (It's not a snazzy acronym, but it works for us).

Her only symptom was the urine discoloration, but it was enough for me to grab my vetcard and pull us from the ride.

In an exam later in the day, the ride vet confirmed what I saw:  no symptoms except the urine color.  We opted to allow Fiddle to "treat herself" by eating and drinking, which she was (as always) eager to do, rather than administer fluids or painkillers that might depress her inclination to eat and drink on her own.

Tye-up can be serious.  Fee's tye-up was atypical, in that it didn't occur early in the ride; she didn't show the discolored urine until the vetcheck at 25 miles.  Her muscles didn't turn rock-hard, and she showed no sign of discomfort or unwillingness to use her back end--in fact, she offered to kick another horse on our walk back to the vet area!

In this case, we are mostly guessing that insufficient electrolytes were the cause.  As my vet says, "we only have one data point, and that's not enough to draw a line."

I dearly hope that we never get more data to draw a line.


As for the mud, it didn't dry up in time for everyone to exit camp without help from the Valet Tractor:
But as for Fiddle, she seems to be just fine.

Not much in the world makes me happier than that.

Here are some online resources and explanations about tying up: