I started the "Five Day Challenge" HERE.  If you want to play along, welcome!

6. Favorite equestrian book and movie
A good horse movie has to be something pretty and not-completely-inaccurate, which is pretty difficult, because once Hollywood gets involved it seems like reality just flies out the window.  So I gotta go with "The Man From Snowy River,"


which is not only a terrific film (though I thought the soundtrack was dreadful) with good horse stuff in it, it's taken from a bang-up good poem by Banjo Patterson, which pleases my Snooty English Major Self.

For books, I'd have to choose Julie Suhr's Ten Feet Tall, Still, and Angie McGhee's Lighter Side of Endurance. 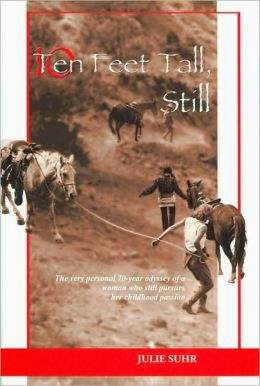 I've read both of those many, many times.

8. Two riding strengths and one riding weaknesses
I am extremely persistent, which I think is a strength.  And I really, really want to improve, another strength.  My body distinctly lopsided right now because my left hip is falling apart, but I'm doing my best to keep riding and work on stuff that I can improve.

9. Least favorite thing about horses and/or riding
Being broke isn't nearly as much fun as I make it look.

10. What do you feed your horse?
In order by frequency of feed:  Hay. Beetpulp.  Carrots.  Apples.  Goats.  Trespassers.