Listen up, Floofs and Friends.
Santa Jim is going to give away some Trade Secrets today.


Jim has a Regular Gig this month as the Santa at Everett Santa on Broadway.   The work isn't easy, but he's sure having fun with it.

But before the fun began, Santa needed to get ready for the Season.

He started in early November with a return to Santa Camp.   The NorPac Santas are not only terrifically fun people, they're also a great network; one of them heard about the job in Everett and referred Jim for it.

So, right before Thanksgiving, Jim went to the salon to silver up. 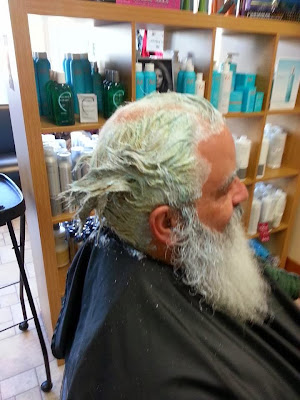 His beard is naturally silver these days, but his hair and mustache are still kinda dark.  With some help from Modern Chemistry

This is what he looks like on the set:


But he doesn't wake up looking this polished.  He currently spends (no exaggeration) up to an hour each day getting ready.


He mixes a few drops of peppermint oil into the "shiny hair and face gel" stuff, and then


smears it on liberally.


Yes, our bathroom smells like a candy cane factory.  I don't mind.

Next comes the Taming of the Facial Hair:


Pro tip:  mustache wax is easier to use if it is pre-heated in a little container of warm water. 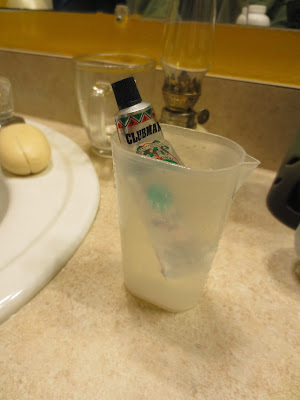 The wax is spread onto a toothbrush 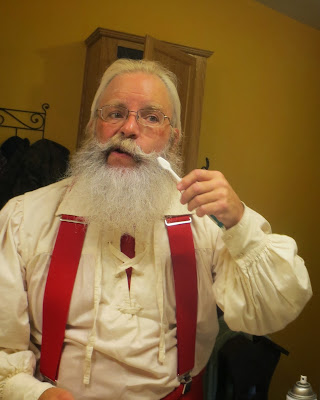 and then stroked carefully through the beard.

Then comes the hand-curling and sculpting.  This is harder than it looks, or so I'm told.


But worth it.  The mustache curl is adorable!

Before leaving the house, Santa packs up his man-purse:


He carries all the needful details of Santa Life in his bucket.

All packed up, he's ready to go!


We know that lots of people are really busy during the Season, so Santa Jim and Monica arranged for a special Post-Xmas Photos With Santa at Fish Creek Farm on New Year's Day.

We're inviting people to bring their ponies, dogs, children, and other family members for a special photo with Santa.

And not expensive, either:  $10 for one photo/$25 for three pictures via Monica's Smugmug.  Want more than that?  We can do it!


Maybe you want to dress up everybody in holiday finery, or put silly antlers  on your gang.  Maybe you prefer a "Hawaiian Xmas with Santa" or maybe just some pictures of everyone having fun.

No stress, no worries, just smiles.  And a few candy canes, of course.

Want to join us?  Leave a note on the Facebook Event Page HERE, or send a message via the Comments below.