In which we celebrate holidays with another little story

2012 was a lovely year...but it wasn't all sunshine and roses for Haiku Farm.

Our dearest, hardest loss this year was little Pickle Marie, who lived in our house only 7 brief months, but will live in our hearts forever.  This story is dedicated to her. 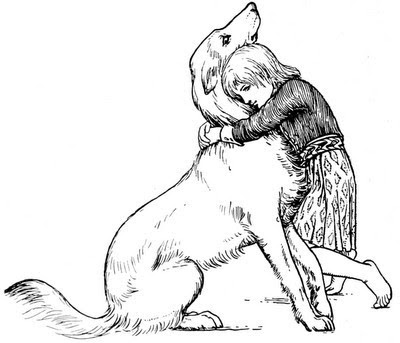 GOING home from Pentre Voelas Church, the good wife of Hafod y Gareg found a little dog in an exhausted state on the ground. She took it up tenderly and carried it home in her apron.

This she did partly from natural kindliness of heart, and partly from fear, because she remembered what had happened to her cousin of Bryn Heilyn. That cousin had come across a strange little dog and treated it cruelly. The fairies had come to her to give her the reward she deserved. They seized her up high, and enquired whether she would travel above wind, mid wind or below wind.

Now, if she had treated the little dog kindly, it would have told her the right answer: she ought to have selected the middle course, which would have meant a pleasant voyage through the air at a moderate height, equally removed from the clouds and the earth. Above wind is a terrible passage between the worlds, and it was well that she did not choose it.

But of course, a little dog treated badly will give no good advice, and so the cousin made choice of below wind, was almost as bad, because she was snatched through miry bog and swampy lea, through brambles and briars, until all her clothes were torn off her body, and she was brought back to her home scratched and bleeding all over.

The good wife of Hafod y Gareg had no desire for any such excursions, and she made a nice soft bed for the fairy dog in the pantry, and fed it well. The following day a company of fairies came to the farmhouse to make enquiries about it. She told them it was safe and sound, and that they were welcome to take it away.

In gratitude for her good works, they asked her which she would prefer, a clean or a dirty cowyard. The little dog who was treated kindly had told her how to answer: there is no clean cowyard unless there are no cows, and so she should ask to be rewarded with a dirty cowyard.

The fairies gifted the kind woman with two cows for every one she had possessed before, and their milk made the best butter in the whole neighbourhood.