In which we celebrate winter holidays with a bunch of stories 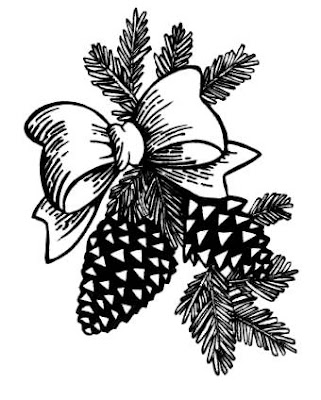 Every year after the world successfully navigates the Winter Solstice, I like to celebrate by posting a series of stories. The stories are usually folktales, occasionally original stories, and almost always re-told enough that their original tellers don't necessarily recognize them.

I've been giving stories as gifts for a lot of years--the original story about how and why my tradition got started is HERE.

Start of the 2009 story series is HERE, beginning with a 2-part story dedicated to all my horse daughters.

2010 stories start HERE, with a story from the Ukraine set on a cold and sn*wy day.

...which brings us to today, and a pretty little story from Bohemia. I hope you enjoy it...and please come visit tomorrow so you can read another new story!

Long ago and far away in the mountain lands, there lived a miner with his wife and many children.

It was midwinter, and Christmas day not far away. The children thought of nothing but the coming of St. Nicholas, who they hoped would not forget them, when every boy and girl expects a visit from the gift bringer. But when they spoke to the miner about it he shook his head and said, "Do not set your hearts upon his coming. Our home is so small that St. Nicholas may not find it."

But the youngest son had a very different idea. He declared that St. Nicholas could find a house in the dark if it were no bigger than an acorn, and went to bed to dream of toys and sweetmeats.

Day after day passed, and nearer came the season. The children talked of him as they sat by the fire at night, as they picked up dead branches in the forest, and as they bedded the goats and shut them in, for mountain folk are a toiling people, and even boys and girls must work.

At last the day before Christmas came, and in the afternoon the youngest son started out with a basket to get some pine cones. He wanted the fire to be brighter and more cheerful than ever that night, and perhaps if he gathered enough of them, he might sell some to the rich people of the town who would pay him with a silver coin. “And if I do that,” he thought, “I shall buy a piece of candy for every one of us in the family.”

Now, in that land, on the summit of a lofty mountain lived a creature named Riibezahlde. He possessed all magic powers, and was so mighty that his sway extended to the very center of the earth. There he had chambers of gold and silver, and diamonds and jewels without number, and often gave of his treasures to those who were good enough to deserve them.

The miner’s family often told tales of Riibezahl, but never had any of them ever seen him.

As the boy came near the fir trees, a tiny white-haired man walked out of the shadow. He had a long white beard and a jolly red face, and looked as if he were the friend of children.
"What are you doing?" he called to him.

"I've come to gather pinecones," he replied; "some for our fire and some to sell, if the people of the town will only buy."

Then he told him of the family, of how eager he was to get some money that he might buy a bit of candy, and of the hope that St. Nicholas would not forget them.

The little old man seemed much interested, and when he finished his story he said, "The best cones are on that tree. If you hope to sell, gather those."

He pointed to a great, dark fir just beyond them, and then went back into the shadows of the forest.

The boy thanked him and ran to the spot. He could see the cones high up on the branches, and just as he came under them there was such a downfall of beautiful brown things it frightened him. But thinking of what he could do with such big pinecones, he went back, filled his basket, and started homeward.

The basket was very heavy, and the farther he went, the heavier it grew.

"I'll have to ask one of my sisters to help me take it down to the town,” he thought. But by the time he reached the house it had become such a load he could not move it, and the miner had to carry it in himself.

"They are lovely big ones and of a beautiful brown color," the boy said as the others crowded around to see.

But when they looked at the basket again, they saw no brown at all. Instead there was a gleam brighter than that of the moonbeams through the fir trees, for a wonderful thing had happened. In the twinkling of an eye every one of those cones had turned into shining silver, which sparkled and glistened so that they dazzled the eyes.

Then the little boy remembered the old man in the forest, and told the miner about him.
He nodded his head in a knowing way and said, “Surely it was Riibezahl, and he has rewarded you for being kind."

When they looked into the basket, they knew it was true. And so knew all the other mountain folk, when the stars of the Holy Night shone out and the children went from door to door distributing silver cones. The miner’s family had so many that they were never poor again, and they shared their wealth with the neighbors as well. They built a fine house with a porch and twenty windows, and were as rich as anyone in Bohemia.

To make things lovelier still, St. Nicholas found the little house in the forest, and left some sweets and toys for the children.

He laughed loud and long when he saw those shining cones, for he had heard all about the magical gifts from Riibezahl himself.