Showing posts from September, 2011
Show all

In which Shakespeare is not welcome in the rafters of the barn, dang it! 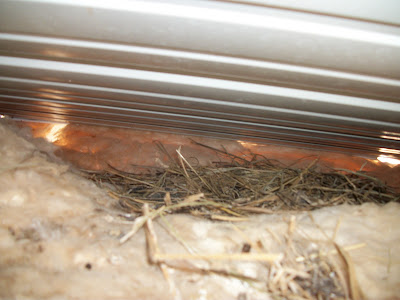 Embedded in the space between the vapor barrier and the barn roof?

Nasty starling!  I did not invite you to come live here!
It sounds crazy, but it turns out that those noisy, dirty, ugly, pesky European Starlings actually were invited to North America.
Seems that in 1890 and 1891 a bunch of loonie-birds decided to bring all the birds mentioned in the plays and poetry of Shakespeare﻿ to America.
Fortunately for us, most of the imported birds froze to death before re-writing the local ecology.
Unfortunately for us, the starlings thrived, and continue to thrive.  From the original 100 birds introduced to New York's Central Park, a plague of starlings has grown that would do Moses proud.  The United States government endeavors to poison, shoot, or trap around 2 million starlings each year...leaving a population of nearly 200 million free to endanger air travel, mob cattle operations, chase off native songbirds, poop on city buildings...
...and, apparent…
12 comments
Read more

In which there's a new article about standies in endurance -- Yay!

I just got the link to the latest "AERC Extra", the fall edition of the online quarterly newsletter from the American Endurance Rides Conference.

And there, on pages 21 and 22, is an article about a standardbred doing endurance, and I didn't even write it!!!

Can you see me grinning from where you are standing?  I thought so.

(While you're there, click on an advertiser or two also, please.  That helps keep the bills paid. Thanks.)

I haven't written about riding lately, because I haven't been riding lately. Not because of the weather, which alternates (sometimes in 30-minute increments) between sunny and humid, overcast and humid, and pouring-down-rain. Not because I don't have time, because actually I do have time.
No. I'm giving my horse a break. The Bare Bones ride was tough. It's the last ride of the season for Fiddle and me (although I may borrow Sky's horse Cricket to …
6 comments
Read more

In which I'm still concerned about my buttcheeks, and I do some shopping 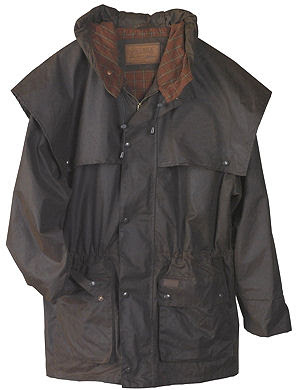 Well, I haven't selected the Next Ultimate Raincoat yet.  I've got several candidates in mind, however.  The photos all have links embedded to go to the seller's websites.
If readers have first-hand experience with any of these products (good or bad, I want to know!) please leave notes in the comments.
I already have the full-length "big sister" to this jacket: ﻿ ﻿*  Waterproof:  yes
*  Breathable:  no, but it doesn't "sweat" either
*  Pit zips:  no
*  Pockets:  yes
*  Hood: yes
*  Cover my butt while mounted: yes
*  Room under the jacket for extra layers: yes
*  Purple?: no

Notes:  this coat weighs a ton!  Also, you don't machine wash it, rather, just hose it off.  I suppose if it gets stinky, I should just wrap it around a wet dog so it smells comforting?
﻿
﻿
﻿*  Waterproof:  yes
*  Breathable:  yes
*  Pit zips:  no (but the manufacturer says that the fit is so loose that pit zips are not needed)
*  Pockets:  yes
*  Hood: yes
*  Cover my butt …
6 comments
Read more 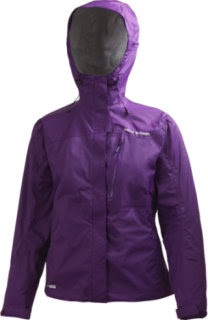 Following the epic failure of my new Helly-Hansen rainjacket at the endurance ride last weekend, I'm on the hunt for a new parka.


I normally buy clothes at thrift shops, because I find retail prices (and the entire "retail experience") to be painful.

However, there are a few garments that I will buy new.  Socks, for example.  A riding partner got me a pair of World's Softest Socks for Xmas last year, and I am now hooked on them, for riding and for work.  They are soft.  They are warm.  They stay up and don't get all crumpled inside my boot.  They hold up in the wash.

Best of all, they come in purple!

A really good jacket for cold and wet weather is another garment that can be worth paying Real Money, in order to get something that really works for a long time. Unfortunately, fashion doesn't exactly support people who want to stay warm and dry in the great outdoors.  While shopping online for a parka, I'm finding a lot of garments like this:

Can you see…
10 comments
Read more 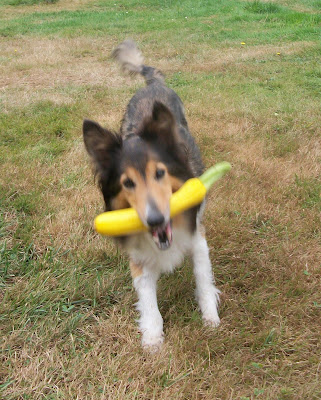 To everyone who has inquired about Pickles:
She is doing very well.   She considers herself a "born Farm Dog" now.   She helps with all the chores, especially when I'm tending the chickens and accidentally drop an egg (or two).

And, of course, she comes to ridecamp with me, so that she can charm all of her fans.
The other dogs are a little dismayed to have such a cute sibling who steals attention from them.
Luna is willing to concede the position of "cutest."

However, the position of "prettiest" is not up-for-grabs.  Luna is,

and always will be, the prettiest.   How can I ever resist those beautiful eyes?

But I've got to admit a weakness for

In which we celebrate "International Talk Like a Pirate" Day

Endurance Riders (sung to the tune of "Drunken Sailor")

Make 'em trot out and then trot back and
(repeat)

Give an award to the tail-end rider!
(repeat)

Here's a link to a really good version of the more traditional "Drunken Sailor" song to get you up and singing.

In which I underestimate the weather and lose my shirt, sorta 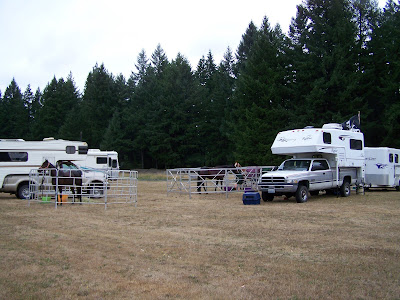 Ridecamp at the Bare Bones Endurance Ride is a large open field rented from the Evergreen Gun Club.  The field is FLAT (excellent for parking rigs, even the big 'uns) and conveniently located only 10 minutes from the freeway.   However...﻿
...the booking manager at the Gun Club didn't notice (until too late) that the site had been double-booked: for the endurance ride and for a group of blackpowder "mountain man" reinactors.  To say that life in camp over the weekend was "not quiet and contemplative" is to understate matters rather a lot.  It was loud.  There was gunfire all day, all weekend. Still, endurance riders are a coping sort of people.  We coped with the noise.

Umm, we mostly coped.  I admit that the gunfire noise, plus the noise from Mimsy barking and Hana hollering when I took Fiddle away for her vet-in did induce a minor meltdown.   I really don't handle noise very well, especially when almost all of the disturbance was coming from my own camp…
8 comments
Read more
More posts