In which there's a "new" kind of inclement weather, and also there's food

The libraries aren't, like, wide open or anything anyhow.  But we've had staff in buildings, and materials available for curbside pickup for more than a month...until Friday.
Friday, the PTB's remembered that, due to COVID19 restrictions, buildings with staff inside are flushing 100% of the HVAC air out of the building and taking in 100% new air, continually.  This minimizes the amount of virus floating around in the internal atmosphere, which is good...
...but when the outside air is rated "dangerous for all things", the procedure is not good.  So, they sent everybody home Friday afternoon, and declined to "open" the buildings (to staff) on Saturday.  Our next "open" day is Tuesday.  Maybe we'll have rain before that?
We can hope.
It's exhausting, and frustrating, and it's just hard work to exist right now--just like the usual kind of inclement weather, come to think of it.
I hate "wasting" days that have no rain.  There are still barn walls to paint, and gardens to be tended.
But about 30 minutes outside is my limit right now.

I get a thudding ache in the bottom of my lungs that acts as my personal speedometer.  Could it be we've found something worse than sn*w?  Sigh.
We try to do a few farm chores early each morning, when there's a bit of fog to weigh down the smoke a little.  By 9am, the sun is warming the sky, the (minimal) fog is burned away, and the air is pretty much just gritty smoke and chewy toxins.
Today, I picked apples.


It's been a phenomenal harvest year for plums.


Elsewhere in the garden, the butternut squashes are ticking along nicely, and the beans are starting to dry on the vine.
I planted bush butternuts this year, and the bushes are hugely productive--and require that some of the smaller, younger squashes get culled so the larger ones will have the space and energy to form a hard rind for storing.


Beans are sorted by type:  runner beans, rattlesnake pole beans, purple pole beans, dragon tongue bush beans, and green bush beans.
Then, each type is further sorted by maturity: very dry = use for seed next year, mostly dry = let dry and store for food this winter, still green = eat immediately.
This is peak season for eating food fresh out of the backyard.
This year, the Backyard Scramble has become a relief, as well as a treat--every meal we grow ourselves is one that doesn't need a grocery store visit to supply ingredients.

In which "never say "never" " is a thing, and Fee and I ride Tevis

I can truthfully say that Susan Garlinghouse convinced me to do it.
Although her most famous horse, the Mighty John Henry, sustained what most would call a career-ending (if not life-ending) injury last year, Susan signed him up for Tevis this year.
And if JH can do it, why not the Dragon?


But, wait.  Isn't the Dragon retired from endurance competitions?
Yes, she is retired.  The sustained concussion of 50+ miles of trotting was causing her too much discomfort--and you know I've always said that "sound enough" isn't sound enough for endurance, and that she would never do another one.
And, hold on.  Isn't Tevis considered one of the toughest (possibly the toughest) 100 mile ride in the world.
Again, the answer is yes.
But this year, now that the World Has Ended, the answer is also no.

This year Tevis (like so many other things) is a virtual event.  And this year, competitors have 100 days to complete 100 miles.
This year, Fiddle and I can do it! 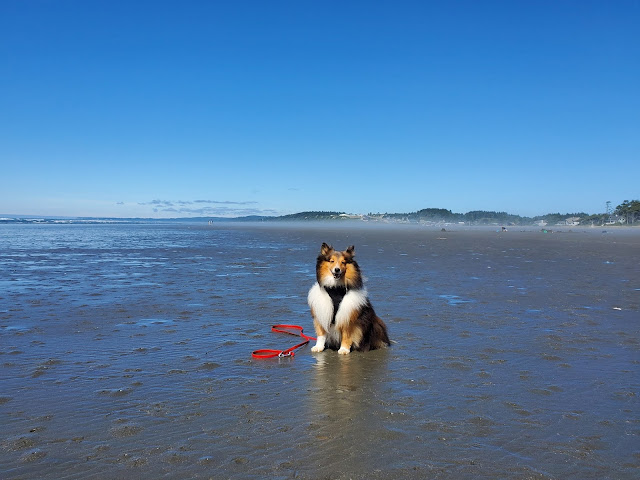 Jim had a wedding gig booked for the ocean, and he invited me (and Foxie Loxie) along for the ride.   Oh, heck yes.


Jim got dressed up and made sure the people got married


We had perfect weather, and the water was lovely


It was a quick trip--a little too quick.  We didn't have time for an important Ocean Vacation Tradition:

CLAM CHOWDER.
However, I am not without resources.

When we got home, Jim got busy with the clams--in the smoker!


While the clams smoked, I prepped the vital accessory:


When the bread was done, so were the clams.  Time to make chowder, the Haiku Farm way:

All Smoke and No Fire Clam Chowder
Ingredients: Broth - I made broth from a smoked chicken.  You can also use canned chicken or veggie broth, or water, or whatever you have.
Clams - I cut the smoked clams into little chunks with a pair of kitchen scissors.
Vegetables - I included corn, carrots, potatoes, an unripe butternut squash, celery, garlic, dill weed, and thyme.  Then I fou…
Read more